The race against the bomb 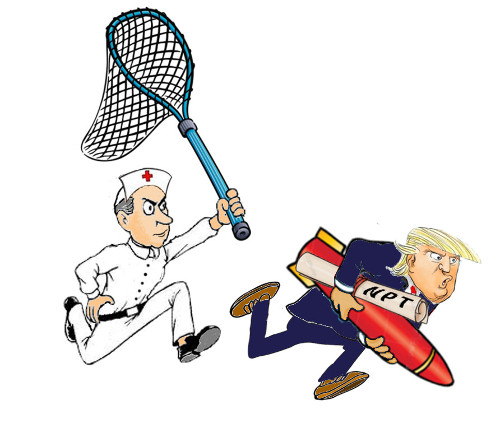 Yes, that's it. Here we are, ready for the great liberation of humanity.

Generations after generations with their genius and their work have made contributions creating a world that is a little better, a little easier, each time further releasing us from the servitude of the alienating forces of nature and human nature.

The progression, whilst slow for a very long time, was nonetheless exponential. The more we progressed, the faster we progressed. This is evident in the field of technology. What was once accomplished in several years can now be done in several days and sometimes in a few minutes.

It seems less so in the political sphere, but it is also true for political change. Political movements are forming and disappearing faster and faster. The expansion and fall of the Roman Empire spanned centuries. The British Empire was built over two or three centuries and collapsed in a few decades. The Soviet Empire collapsed over a few months. We can expect that the collapse of the American Empire will be even faster.

Our liberation is exponential. Change is exponential and the chemical reactions, which are the basis of any change, are exponential. Of course nothing can progress indefinitely and infinitely fast. At some point there is saturation and a period of stabilization, a tipping point, and the establishment of a new paradigm, which will also begin its exponential decomposition to make room for the next paradigm.

So here we go. We have arrived at this point where our system of society is changing and this change is leading us to a new paradigm bringing with it the great liberation of humanity.

The technology that will free us from bondage through work and money is ready. Our machines have learned to walk, talk and just begin to understand. They are ready to replace humans in all the activities that are necessary for our survival and fulfillment. No one therefore needs to work or to put oneself at the service of others to ensure one's survival. The machines will be programmed to be our docile and dedicated servants and do the work necessary for the proper functioning of the whole society. They will repair all the damage done to the planet and positively contribute to the ecology and happiness of human beings.

Paradism, the system of society without work and without money that allows the establishment of a paradise, is being put in place exponentially. Expanding robotization causes the collapse of the remuneration by the labor on which Capitalism rests. It also brings abundance and therefore the collapse of prices. There will be no salary, but everything will become free.

It is the gift of our ancestors, who sacrificed themselves at the cost of much suffering to be able to offer us one day, as inheritance, this better world, the paradise that they aspired to. The forces that have brought us today to Paradism were unstoppable. We are all in search of freedom, wellbeing and happiness. All systems of society that do not maximize the freedom, wellbeing and happiness of individuals are therefore doomed to failure.

If Paradism is unstoppable and if there are no other sustainable systems of society possible for mankind, there is still an alternative. This alternative is nothing. It is Paradism or nothing.

The only thing that could stop the establishment of Paradism is the atomic bomb, the extinction by the atomic bomb of life on earth. All the other dangers that threaten humanity, overpopulation, pollution, climate change are all reversible and have political and technological solutions. The only real danger is the self-destruction of mankind by the atomic bomb.

This should be the major concern of humanity because the danger is real and imminent. The Elites who have profited so much from the Capitalist System and who see their power and control threatened will not renounce them without a fight. The Elites have every reason to increase tensions and divisions between peoples and trigger a global war.

They must divert attention from the growing inequalities of wealth in a system of which they are the only beneficiaries by creating a great danger. The circus, which they have abundantly provided us with, no longer proves enough to prevent the revolts, which are erupting everywhere. The threat of war, the terror of a dangerous enemy (Islamism, North Korea, Russia, China etc.,) are necessary for them to silence dissent, to have more control over the population and have them accept more bondage and sacrifice in exchange for the illusion of security and protection they claim to offer.

It is always the same bargain between the Elite and the People. "You serve me and I protect you, and if you do not have an enemy, I'll create one for you."

Wars and threats of war are also extremely profitable. Apart from the silencing of the opposition, enormous profits are generated by the manufacture of weapons and the reconstruction efforts that follow destruction. A global war would depopulate the Earth, eliminate the problem of “useless mouths to feed” that weigh on the current system. And finally, by wars, the Elites, who compete among themselves for the plunder of the planet, can settle their differences.

The greatest danger comes from the United States. Their dominant position is disputed and the lucrative racket they exert on other countries by requiring them to trade in dollars threatens to end. This is an extremely dangerous situation because it will put the United States in a state of bankruptcy with the impossibility of financing their still almighty army. For the American elites, the temptation to go to war now is enormous. If they emerge victorious it would allow them to retain their dominant position while settling their accounts with their defeated creditors. The anti-Russian and anti-China propaganda via North Korea, necessary for the preparation of the population for war, is already well underway. It would only require a false flag event in the style of 9/11 to shock the population into feeling sufficiently threatened to justify war. The situation is extremely serious. We have nuclear powers that are preparing for war. They test their missiles, position their armaments and train their troops.

The nuclear threat has never been so serious and yet this is not what concerns people, because the mainstream media, all owned by billionaires, manipulates us, misinform us to divert us from the real problems. We are mobilizing to save whales, allow marriage for all and stop so-called global warming, but few know there is a UN treaty to ban nuclear weapons, that has recently been negotiated and will be ready for signatures and ratification by all countries from 20 September 2017 and all the nuclear powers and their allies will be opposing it.

Intellectuals, artists, opinion leaders, who could bring us together in large scale anti-bomb movements do not. Their words are said to be stronger than weapons. They are the ones who are listened to and can initiate the popular movements. It is through them that we can unite and stop wars as we did for Vietnam. It is up to them to alert us about the bomb because they are the ones who have the ability to do so. They are our mouthpieces, but they do not speak out. Our superstars have first been filtered for political correctness by the media at the service of a now more knowledgeable Elite. They are only there for the circus, to distract us and divert us from the important issues.

It’s the race against the bomb.

While the nuclear powers are preparing for war, we have this Nuclear Weapons Ban Treaty happening just in time as our last chance to save mankind. We must mobilize ourselves and do everything possible to ensure that all nuclear powers join the treaty before it is too late. All other problems and dangers will be resolved very quickly if humanity does not destroy itself in the coming months. Let's not waste time and energy on anything else.

We are at the gates of paradise. In paradise there is no more competition. To enter it we must renounce the competition and abandon our weapons. We must cooperate and share. Armed conflicts to appropriate resources no longer have any reason for being, because new technologies bring us abundance and make competition useless. People will no longer be afraid of lacking and the Elites will no longer be afraid of losing. It’s a win win. By disarming we will emerge from barbarism and unify ourselves to create a planetary civilization living millennia of peace and pleasures.

This is the vision of the future that must be given to humanity to get it out of its suicidal despair and make it want to live. These words are a call to everyone who reads them to do everything possible to win this race against the bomb. There is everything to lose and so much to gain. The bomb is the last obstacle before Paradism.   It is the bomb or paradise, because without the bomb, our future is guaranteed to become a paradise.

“The world will not be destroyed by those who do evil but by those who watch them without doing anything.” Albert Einstein