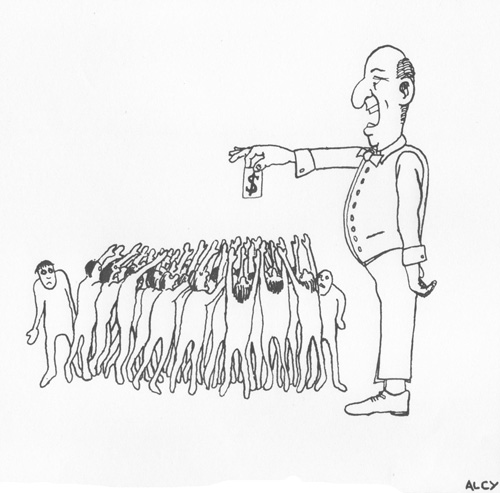 Article: Basic income versus the robots

This article is refreshing. It addresses the problem of wealth redistribution as the automation of labor creates more unemployment and more extreme inequalities (see article "the real issue the media do not speak about").
The owners of the means of production get much richer while an ever increasing number of unemployed get much poorer.

How are we going to distribute a production that is becoming increasingly productive?
Laying off people and denying them access to the consumption of an increasingly abundant production is nonsensical and cruel.
The redistribution of wealth is the most important issue right now. Many will suffer a great deal and violent revolutions will erupt (if they have not already). The longer we wait the more painful it is going to be.

The basic income, a regular cash payment for everyone regardless of employment or income, is the solution presented in this article. An idea that is more and more becoming mainstream thinking. It is certainly a step in the good direction. Many amongst the paradists think the basic income could be implemented in the transitional phase towards the society without money.

The basic income alone will not solve everything though.
It will not prevent the polarisation between those who own the technology and the means of production and those who don't. The class system with a minority of super rich owning the larger share of the wealth is already exacerbated (today 10% owns 83% of the wealth). And it is not going to get better.

The basic income might allow capitalism and the monetary system to buy more time. It won't change however the fundamental values that prevail in a capitalist society and that need to be abandoned. Values like competition, ownership, property, money, profit. It won't fundamentally change the system that is keeping us in scarcity and preventing the arrival of the abundance.

You surely know the game monopoly. What happen at the end? One player accumulates all the wealth and all the other players go broke. The game blocks. One is declared the winner but in fact everyone loses. There is no more game. The winner can't even get any more income once he has led all the other players to ruin.
In the monopoly allegory, the basic income would be like allowing the bank to give enough money to each player to play the next round and keep them in the game.
In the real world where would the money have to come from? From the rich of course since they are the ones who have it. The middle class, those who still have a job, is progressively disappearing and getting broke too as the competition for the remaining jobs is drawing the wages down. The super rich will have to be super taxed and the money will then be handed to the poor who will spend it and give it back to the rich. That will keep the flow of money circulating and the game going. The problem of course is that the rich don't like to be taxed and the poor don't like to be poor. The two classes polarized, will be at each other big time!
Notice how we are already living this end game of capitalism and the poor are taking the streets.

The basic income is a good initiative to operate a necessary redistribution of wealth and help compensate for the creation of more poverty but it is not a solution. It is a temporary bandage which might be good enough to stop the bleeding for a while but it won't be a game changer.

A real solution, the only real solution as we will see, the game-changer remedy we must apply and that is also one of the primordial action of paradism would be the nationalisation of the means of production and its corollary, the end of intellectual property.
The word "nationalisation" could better be replaced by "communitisation" since the concept of nation is meant to disappear along with the frontiers that separate us.
If the community owns the means of production, it is the whole community that benefits and not only a few.
If the means of production are owned by a minority (or even a majority), they will seek profitability so as to retrieve incomes and privileges. They will not seek to reach the state of abundance but will try hard to guaranty their profit by maintaining a state of scarcity. They will continue to do what they are doing now with the limitations of production, the protections of markets and the planned obsolescence. They will be an obstacle to the state of abundance and it will be at the expense of the whole community.

Therefore the communitisation of the means of production is the only possible path to the state of abundance brought about by technology.
Anything short of that and humanity will experience a class struggle of global proportions between the technology capital owners and the non-capital owners as the gap separating the two will only be exacerbated by the technological progress.

The communitisation of the means of production brings as an add-on benefit the ending of the class system. It will give birth to an egalitarian society where everybody can have the same access to consumption and nobody lacks anything.

It also entails the end of copyright and intellectual property. Everything, every new creation, every new idea can be duplicated around the globe instantly. The rise of 3D printing free from copyright laws will tremendously facilitate the production bringing the state of abundance far more quicker than capitalist corporatism which tries hard to prevent it.

The people revolution that has started will hopefully lead to this. The paradists are invited to bring the issue at the forefront of the debates that are taking place as it is the most critical one and it doesn't seem to be discussed yet. It will be disappointing if the demands of the protesters in the streets were to be quenched by concessions like the basic income. The lasting social peace can only come with the communitisation of technology and the means of production.


Related articles and videos:
The real issue the media do not speak about
Planned obsolescence and the deferring of the abundance
The ending of copyright laws and intellectual property